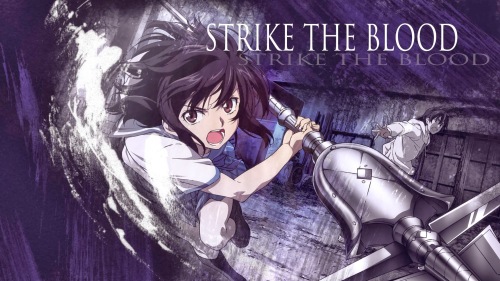 We live in a age where vampires stopped being seen as creatures from the dark and started shinning at the sun. But fear not, my friend, Strike the Blood may have vampires different from the nosferatu of the old, but so far has enough to keep us (and by that I mean me) interested.

Let me start by saying that all I know about this tale is what I’ve seen in 10 anime episodes. No manga or light novel here yet, sorry.

So, the story takes place in Itogami City, a man made island in the coast of Japan.  It´s a home for various kinds of demons, and people actually seem to take that as pretty normal. There are even magic wielding humans around, so… 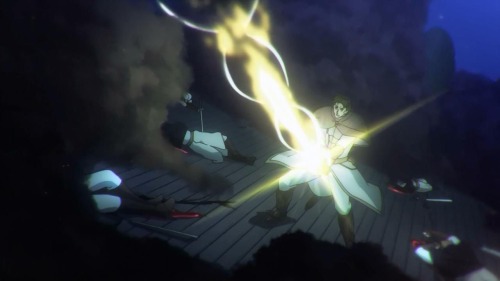 We follow Akatsuki Kojou, the Fourth Progenitor, the supposed most powerfull vampire in the world. But, before you start to get Hellsing vibes, know that he can’t really use all that power. As I said before, the vampires work a little different in this story, and the most powerfull abilities from Kojou are magical creatures that he can summon, his familiars. Sadly, he hasn’t being the Progenitor for very long and they don’t really work well for him at the beginnig.

The thing is, Kojou is a nice guy, and as he does not drink human blood, he is not really a honorable vampire, or so his familiars seem to think. I respectfully disagree. My opinion is that Kojou is a pretty good protagonist. He is kind, but not lame self esteem kind. He has a powerfull raw potencial, but he is not a unbeatable overpowered character. And he is not another “let’s-make-a-lame-yuuji” character, or Yuuji-chara.

Now, i like Yuuji. He is a very good protagonist. But, even tough he was not the first (the oldest a remember now is Yakumo from 3×3 eyes), I think Yuuji popularized the trend of common dude type of main characters whose story only gets going after “The Girl” gets in his life. He was already kind of special, but only when Shana (The Girl) appears that his story starts. Sadly, as most trends, many of the ones that came after where lame cash-ins.

Akatsuki Kojou has one “The Girl”, but he is already a protagonist when Himeragi Yukina starts to, quite literally, follow him.

So, now let’s talk about the girls, after all this is a harem anime. And the feminine cast so far is… half good. By wich I mean that I like half of the girls.

Himeragi Yukina is our main heroine. I like her, except for the fact that she insists in calling Kojou a pervert. Aside that, she is diligent and, even though a little clumsy, competent. She knows a lot of info on how things work and she fights well too. Also, I like that she is good without having to overshadow the protagonist.

Well, there’s something else: She makes me remember freaking Bella. Yes, the Twilight one. Because everyone says she is extremelly beautyful and I find her just kinda plain.

Since I am no fan of overpowered fake lolis, Minamiya Natsuki Sensei is not really for me. But I can see people liking her, if it’s their thing. Besides, Dark Chains!

Nagisa, Kojou’s sister, shows no super special awesome complex feelings for the main character. She treats him like a simple boring brother. For me, thats just how it should be. I never understood that japanese thing for imoutos, sorry. That said, she is kinda annoying.

Asagi is cool. She is cute and has super magical hacker powers. Besides, she is very honest and fights for what she wants. So far, my favorite girl, would totally go for her route.

Sayaka on the other hand… I hate this character. I liked the series as a whole more before she appeared. One of those tsunderes of low quality, with no reason besides stupid pride and jealousy to act like an ass with Kojou, and a very typical “main heroine old friend” that treats the protagonist like trash. Then, she starts liking him and we should forget she was a bitch… Do not want. Again, if this is your thing, I won’t point fingers.

Well, with all those girls, Strike the Blood should be just a cutesy moemoe-kyun anime, Right?

The action is good too. Remember, Kojou is the Fouth Progenitor, he is very strong. And the enemies are pretty decent too. Overall, it’s no Jojo, but it isn’t bad at all.

So, is it worth my time? 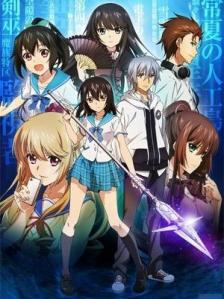 Yep, I think it is. There are some problems here and there, but you should at least try it. I have already wrote over 750 words about it, and there is a lot more to talk. Strike the Blood is not a simplistic story, it has depth and complexity enough to keep me interested even with the bad parts. I hope it keeps the pace and the good action, with some romance. Romance is good. As long it isn’t with Sayaka, that is…