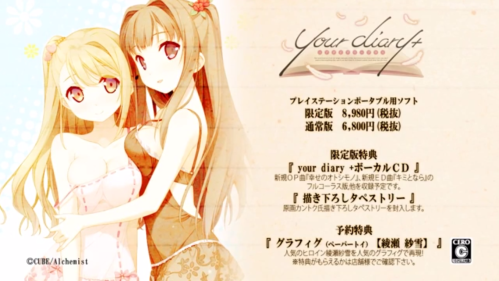 “Your Diary” was originally released on 2011 as a PC-only +18 game by CUBE – a sister brand of Cuffs. It was a beautiful game with a simple but heartwarming story. Unfortunately, it was very underrated (I blame the lack of incest, which is Cuffs’s most recurring theme). However, Alchemist decided to give a second chance to this title in the form of an updated port for the PSP, adding a lot of new features (but not incest!). 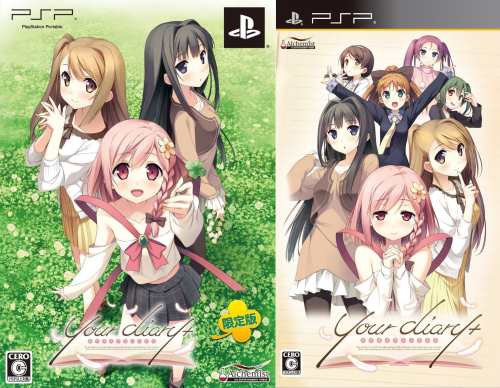 Nagamine Tomoki tries to confess his feelings to the senpai he most admires: Ayase Sayuki, but he hesitates by seeing a deeply sad expression on her face. He continues to work alongside her in the school’s library committee, seeking to learn more about his loved one.

A certain day, he visits a seemingly abandoned bookstore, where he finds a mysterious locked book called “Your Diary”. Misuzu – The owner of the place – says the book chose him and gives him the key. 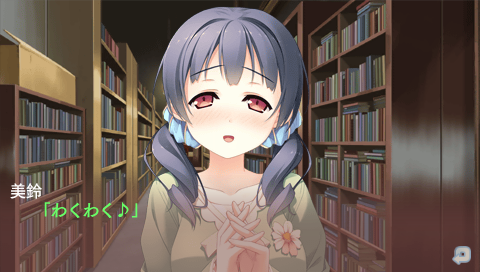 When he unlocks the diary, a cute little girl comes out of it and introduces herself as Yua, the goddess of happiness. She explains that her illustrated diary has become Tomoki’s property and it will fill itself with new content for each of Tomoki’s new happy memories.

Since the supposed goddess insists to stay by his side to help him achieve happiness, Tomoki has no other choice but to challenge his childhood friend Minagawa Yuuhi to a racing game match to get her permission to keep Yua living with them. 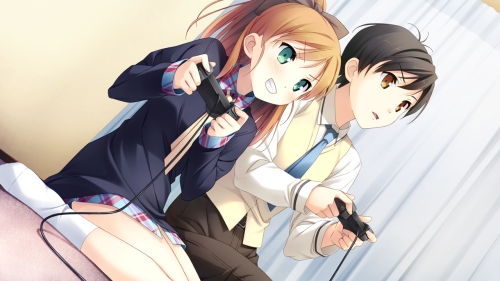 Thanks to a happy-and-erotic accident, the match ends in a draw, but it is enough to convince everyone of Tomoki’s resolve. Except for Yuuhi’s father, but he is soon one-hit-K.O.ed by his own daughter and never complains about it again. 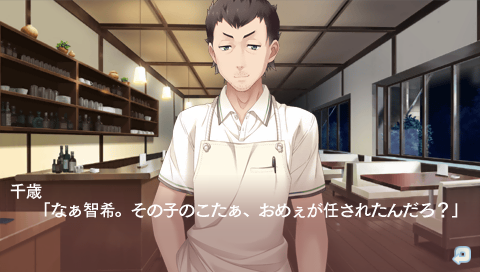 Oh Yeah! I almost forgot! There is Hirosaki Kanade – Tomoki’s best friend’s little sister…she is not very important, but we need a least one imouto-like character in a Galge…

There is a completely new character created by Futaba Ryouichi, a relatively new scenario writer who previously worked on CUBE’s Kurafuta. Since the atmosphere between those games are not so different, Futaba did a nice work, both with this new character and with the new scenarios for the sub-characters, But Enough Talk! Have at you new heroine! 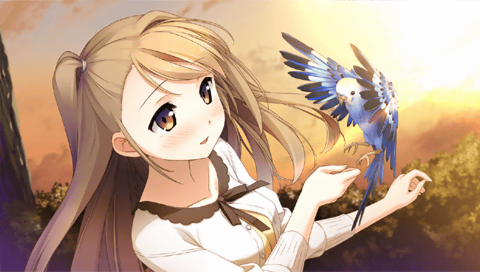 Ichinose Hotori is an extremely popular school girl whose class is next to Tomoki’s. She gets confessions from many people she doesn’t even know because she is always helping everyone, but she usually gets nervous when this happens, since she is very shy and have problems to refuse other peoples requests. Which means she has a personality very similar to Sayuki. Therefore, this causes a very awkward feeling every time those two share the same scene (which is a lot during Hotori’s route). 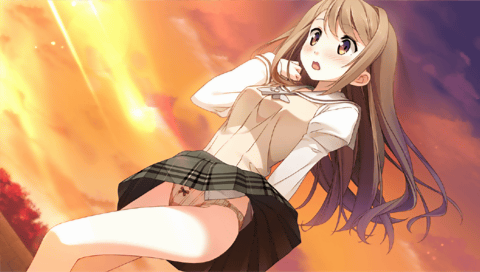 Her first contact with Tomoki happens when he sees one of the many random guys who confesses to Hotori on a daily basis. He gets interested in her by seeing her sad expression, which showed how much she cares for everyone.

Eventually, she becomes friends with Tomoki and even George – Tomoki’s cat – befriends Hotori’s pet bird Shuu-chan (whose name comes from chu cream). Later, Tomoki sees that she helps other people too much instead of looking for her own happiness, so he decides to teach her how to be a little more spoiled, which ends up with the two falling in love for each other.

Enomoto Kaho is Yuuhi’s best friend and the promised dumb girl of the group. A tomboy who made an alliance with Tomoki’s best friend – Hirosaki Hibiki – to make Tomoki and Yuuhi a couple. However, in her route, an weird accident makes her start to see Tomoki as a man. This scale up to make her fall for him. 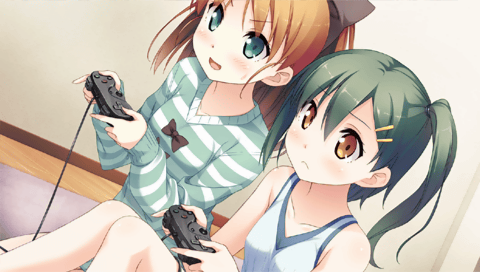 Her route is very interesting and well-written, as Tomoki helps her to get over an old trauma and resume her softball training, which makes Kaho become a central figure in her class during the sportive festival. This means a big character development for her, and this is always great!

Fujimura Natsuki is full of wonders! I always asked myself why in the hell she didn’t have a route of her own in the original game! She was so darn cute! And different from Kaho, she develops feeling for Tomoki while still in the normal route. This time, Alchemist is here to make things right by giving Natsuki a proper route where she can show more of her cuteness and dirty tricks to win on chess against Tomoki. And Damn it! SHE IS ABSURDLY CUTE! (And cheap!)

Her route have the over-used “moving-far-away” type of plot, but I forgive this since it happens right at the beginning and it gets solved pretty quickly. However, her route still gets a minus because of her parents, who are just a copy-paste of every parent from any Japanese media. Which means the father is a lousy old man who is overzealous for his daughter and is totally against her relationship with the protagonist, while the mother is a calm young-lady who completely dominates her husband life and is always encouraging the protagonist relationship with her daughter. I am just too tired of seeing this setting of characters!

When Tomoki helps convincing her parents to keep her from moving, the two start to think about each other frequently. It doesn’t take too much until this develops into feelings of love and the two start to date. However, Kaho misjudge the couple by saying they don’t look like lovers at all! (she is pretty dumb, you know?). This result in many desperate struggles from both to get even more lovey-dovey!

I must confess something: The first Galges I played on my PC had a font error, so it was impossible for me to read any text. It was when a friend of mine told me a “trick”, all I had to do was to pay attention on the heroines dialog (which always was voiced), by doing this I would be able to easily tell what the mute protagonist was saying or thinking, and it worked! This made me realize just how simple the writing in some of those games were. This was because the main focus of a Galge is normally on the heroines, so there is no need for a much complex main character, they just need a “place-holder” that makes possible for the heroines to shine even more.

That’s why I believe games like this one are more mature in the nature of it’s story-telling and not because it has a bunch of Ero-scenes. While Tomoki is mute and even has a very generic design, he has a very strong personality, always have a saying in any important situation and it’s his decisions that move the plot forward! I also must add that his dialogs are actually interesting! I just can’t predict what he will say or what he said based of the heroines reaction like I do with most Galges! This makes him a proper protagonist, and I love this kind of stuff! 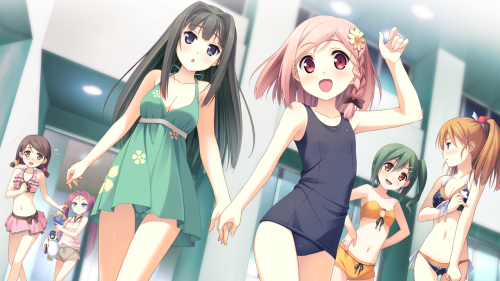 The artist and character design is from Kantoku, who works as the illustrator for the Hentai Ouji to Warawanai Neko’s light novel. Following the more mature theme, the characters are very cute and colorful, but they are not overly colored, nor have absurd body proportions. They also don’t use ridicule accessories and their clothes are not so “revealing” or obnoxious as on other Galges. There isn’t any standing graphics doing weird/erotic poses and there is a right time to deliver the ERO parts. I really love what Kantoku did with this game! It makes me wish he worked on other titles!

Well, there are some problems with this port. The control response is not so great, the options in the gallery mode are very limited and since they tried to recycle every single piece of voice-systems from the original, there is a voice message giving a warning that you are saving over an old file, even though you are saving in a new file…Nevertheless! The additions are very well implemented and it made worth playing the game again just for those. It even almost made me playing through the old heroines routes all over again, which reminded me about just how likable and interesting those characters are! 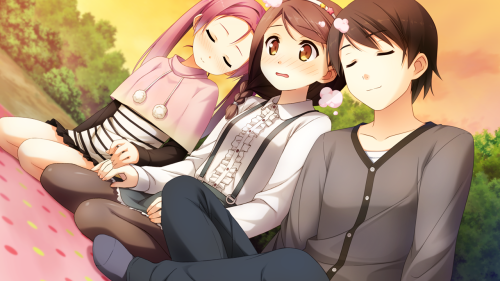