It’s finally here! After being delayed for a week and having problems with it’s shipment, this fan disk finally got released after being first mentioned back on march, 2012! But no more suspense! Here it is the sequel for Hiyoko Strike!

On the first game, we learned that our protagonist was anything but bored, since he comes in contact with ghosts, magicians, ancient deities, outer dimensional beings and others. But nothing about that really matters! What is really important is that our hero has a young sister and, oh boy, SHE IS CUTE!

In other words, you don’t really need to have played the first game to understand what is happening in this one, since Hina wasn’t really related with those supernatural stuff anyway. Even so, meeting with those characters again reminded me how the original title was surprisingly good. Sure, it suffered from some flaws, but it had a cast of charismatic characters and some interesting plots here and there. Who knows? Maybe this fan-disc makes the reader interested in trying Hiyoko Strike too! I can see that happening, but not with Touhikou Game, though! 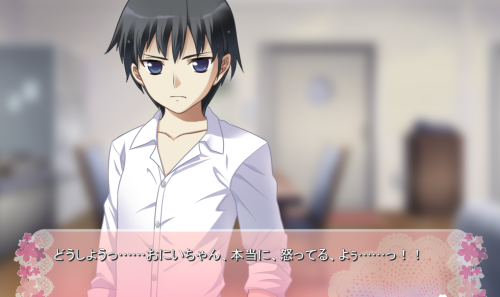 Kaguradori Shin is NOT a normal teenage boy. He is a considerably handsome boy with a very peculiar pale skin and capturing blue eyes. He also possesses great artistic sense and is skilled in many forms of drawing. Personality-wise, he is usually very reserved and is not very good at showing expressions, which makes people around him keep away, thinking he is a delinquent.

His sister, Kaguradori Hina, not only have much in common with him, but also took his specs to a whole new level: People often compare her beauty with the perfection of a doll, and she is a very talented artist too, being able to make any kind of outfit since her childhood. However, her skin, which was even more pale than her brother’s, and her turquoise eyes made some people uncomfortable around her and she was victim of some serious bullying, where some kids attacked her with scissors and ruined her hair while hurting her – both physically and mentally – in the process. Fortunately, Shin fought against the bullies and almost killed the boys while suffering heavy injuries. This made Hina very happy, but them, she realized that she was also very pleased to see the bullies suffer.

This event had a very heavy influence in her personality. She became extremely insecure and unstable. She would depend only on her brother and no one else, not even her parents, to the point where she claims she would die without Shin, and since this is a Galge, this leads her to develop a strong brother complex. However, she is also very insecure about herself, being afraid to cause trouble for him, at the same time she doesn’t want to be apart from him.

Well, the problem (?) is that Shin has always loved her as a woman even before her traumatic experience. He can show murderous tendencies for anyone who does something bad against his dear sister and even has a fetish for the hair that Hina hates so much. For this reason, he decides to elope on a school outside his home town, just to avoid making a move on his own sister, but this proves to be in vain, as she follows him to live together in his apartment. She enters in the same school as Shin, but since she was still a problematic child, she mostly stays as a shut-in in the only bedroom, while Shin gets the couch (he insisted to be like this, by the way).

Many things happen between the two siblings, and after she reluctantly confesses her feelings, Shin proposes for her, and the two decide to consider themselves married, and even if society was never to accept them, they would not care, as they promised each other to always be together.

With this, Shin expected Hina’s social problems to be cured, but this actually just made things worse, as she now became afraid to give her loved brother a bad reputation for being dating his weird and ugly sister. Not only that, but deep inside, there was still a part of her that did not believe in Shin’s love, and she suspected he only returned her feelings out of pity for her.

Now is on Shin’s best interest to make his sister believe in herself again so he could proudly show off his beloved girlfriend to everyone. As if this wasn’t hard enough, it seems they are also stuck in some type of time-loop! Damn you, Galge developers and your time-travel mechanics in your sequels! Who started this trend? Kagetsu Touya?

By seeing the premise of this title, it’s pretty obvious there is only one heroine to capture. This doesn’t mean there isn’t other female characters (even though the official page and getchu suggest otherwise).

For a game with such long development period, it is surprisingly short, but that’s ok, since this was to be just a fan-disc about one single character. What really bothers me is that there are many things that point to this game being incomplete. There are parts where you get just one choice, but later, after seeing some events, a new option appears at that same previous event, unlocking new paths. However, there are parts that never get more than one choice. 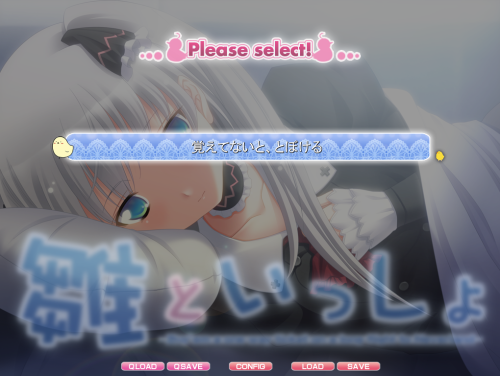 There are also some plot points that are never fully explained. Of course, you could assume a lot about the truth behind those mysteries, but you never get the feeling of a real conclusion. 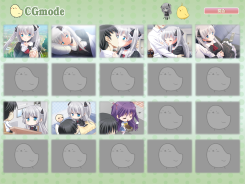 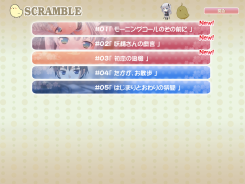 I just wonder if Ex-it will ever do a patch of something to add more content. I would really appreciate that! 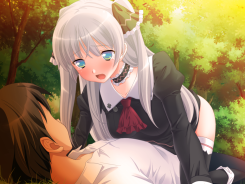 Being very honest here: I don’t like Yasuyuki’s drawings very much. I find his style to be too plain and the coloring very weak. The poses also feel very stiff at times, some CGs don’t give a sense of deepness and some expressions are weird. It lacks impact to me and the quality is akin to some MS-DOS titles. The game specs doesn’t help either, with the basic resolution being very low. Nevertheless, I feel like Keima with his Yokkyun! It’s not about the graphics! It’s about the heroine’s pure feelings and complexity! And Hina has a lot of those! At the very least, those elements are depicted decently in Yasuyuki’s work.

The music is a step forward from most nowadays Galges, but just a single step! While the vocal songs are enjoyable and most of the BGMs are relaxing, there’s nothing that comes as a remarkable piece. Nonetheless, the soundtrack still do a decent job!

The voice action is kind of a mixed bag, with some moments of really good performances, just to give you some really shit acting in other scenes which involve the same voice actor who did great previously. As a whole, it is fairly decent and even Maki Idzumi – whose work I usually don’t enjoy much – does a good job. 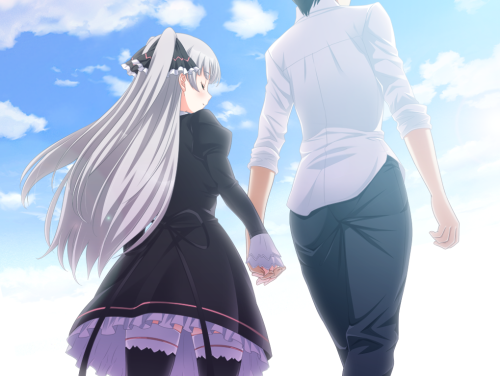 This was an enjoyable little title, but it was so short in the end that it made me feel a bit unsatisfied. This feelings can be even justified considering the amount of time that took for this release. During this period, Ex-iT even released a complete new title, so why would take them so long to make a game with a lot of recycled assets? Taking all the problems into account, I still hope to see more of Ex-it soon! I just hope not to have to wait too much for it.

This entry was posted in Galge and tagged Ex-iT, Fan-Disc, Galge, Review. Bookmark the permalink.

One response to “Galge Review – Hina to Issho”