Well, I’ve been kinda late on making a new review. To correct that, I went on a research of which titles I could write about lately. So, turns out there is an anime called “Mahou Sensou” on air this season. Well, since I like me some magic and some war, an anime with a title that  translates as Magic War or Magic Warfare (I guess the second is what is going around, since “Modern Warfare” is popular) sounds pretty good to me. With good spectations, let’s delve on this one, shall we.

Our main character is Takeshi, a Japanese student… Let me guess, this anime is not going to give much of magic war, is it?

So, yeah, Takeshi is a Japanese student who has family issues. At the very beginning of the story, he already has a girlfriend, Isoshima. Sadly, since she is not the main heroine, she is probably going to take the good old boot to the booty, not that I care much for someone who is, in fact, quite annoying.

Then, on that fatidic day, Takeshi is opening a door that should lead to a empty room when, right from inside comes The Girl… wait!

Well, that was awkward, no ecchi scene for us, I guess. The Girl here is called Aiba Mui and she has brother issues too. Right of the bat, she wakes up and pulls a gun on Takeshi. Dangerous girl, I like it. Some talk goes and…

Ok, seriously, that would not happen even if you tried… By the way, she proceeds to try shooting the guy again. And misses… from, like, point blank. Oh boy, she is bad at this. The Girl is our first sight of magic in the story. And so is for Takeshi, who now can see magic things thanks to being  touched for the super special awesome smoke from Aiba’s gun, or something like that. It’s complicated.

We are then introduced to Aiba’s brother, who is the leader of the F.A.G. 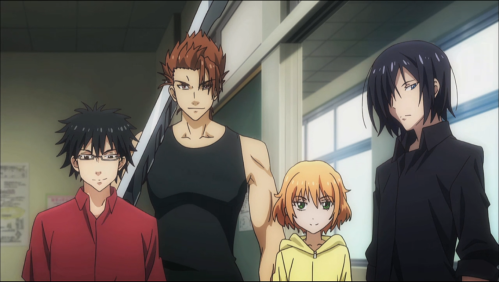 Well, F.A.G. stands for First Antagonist Group. They are usually the guys who exist with the sole purpose of showing the main character powers to the audience. Many times, F.A.G.s are weak and don’t ever come back after a good beating. In Mahou Sensou, I don’t think that is going to be the case, since they are on the opening.

So, to make things a little more balanced, Takeshi has to fight only one. You know, fair play.

To be honest, the fight is pretty good. Except by the fact that I spent the whole time trying to understand why the wooden sword took so long to break.

After the fight, a short chase sequence happens and then hoLY SCRAP!! Run to the hills F.A.G., Takeshi is friends with Gilgamesh! 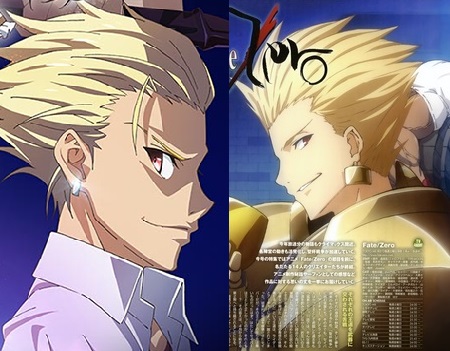 Aiba and Takeshi can finally take a moment to talk and she explains that she, by accident, transformed him in a mage. Wait, what?? How does that work?

Well, apparently, if you are not an adult, you just need to get in contact with magic and, puff, instant mage. Moving on, the leader of the F.A.G. don’t remember being Aiba’s brother because a group called Ghost Trailers (and I am not even joking, this is really their chuunibyou name) has erased his memory. This group is the villain of the story, or so it seems. The thing is, humans are afraid of stuff they cannot explain, so they burn mages on sticks calling them witches. Nowadays, most mages try to conceal their existence, so humans won’t try to kill them. The Ghost Trailers respectfully disagree, they think humans are the ones at blame, I kinda agree…

Then, shit happens all around. Isoshima finds her boyfriend, Takeshi, talking with another girl (they are Japanese, so this is a big deal) at the same time that the villains appear. Magic attacks fly everywhere (not quite) and the enemy even hits Takeshi’s girlfriend. Ok, here comes a little problem.

You can’t use your Ancestral Magic in this normal world. Because, if you do, you’re in for some pain. And you lose your magic powers while any non mage who gets hit by it becomes a powerful mage. Unless the non-mage was Isoshima. She sucks, so the power she gets is the powers to make her boobs grow.

Aiba explains that she did not lose her magic powers because the main character was not a mage. So, attacking non-mages is ok? Thats fair… Goku is safe from Vegeta, but the poor humans? Screw them!

What is not fair is this explanation. Because Gilgamesh just comes around and, guess what, the girl of the F.A.G. who fought him has lost her conscience after using her powers against him, and he was not a mage before being attacked by her. So, the hell?? Am I loosing something? I don’t get it. Who can and who can’t you attack?

Ignoring that, we finally get the ending of the fight from our protagonist. That, I admit, is very good in this anime, the fights. But, seriously, it’s so weird and confusing. The first episode ends with the group going to the ruined world, a place where the magicians live.

And then, they learn they have to go to school here too…because JAPAN!

I have watched a little more, and it didn’t get better for me. The plan was to write aboult 3 episodes, but I just couldn’t stop complaining about the first. Later, it goes from the only city on this magic world being Tokyo, even though all the magic stuff has super engrish chuunibyou names, to the weapon wielded by Takeshi being named GunSword. No mentions to Final Fantasy 8 at all.

I am not one of those angry reviewers, I don’t like to say bad things about an anime, but this time, sadly, I have to say that I don’t recommend. The action is good, but this can be found somewhere else, just like most of the things in the story. But there has been better magic world, action school and fighting romantic life animes around. Sad, I wanted to like this, I really did.

This entry was posted in Anime and tagged Anime, Mahou Sensou, Review. Bookmark the permalink.