We are at the beginning of a new anime season and that means it is the perfect time to do some reviews. And for today’s review, I choose an anime that I know nothing about – Mahouka Koukou no Rettousei – to watch the first episode and give you guys my opinions about it. Let’s give it a shot.
Mahouka tells the story about a future where the world had a Third World War that only ended avoiding a thermonuclear apocalypse thanks to the literal use of magic (Yes!! Magic warfare! Let’s hope this one delivers). 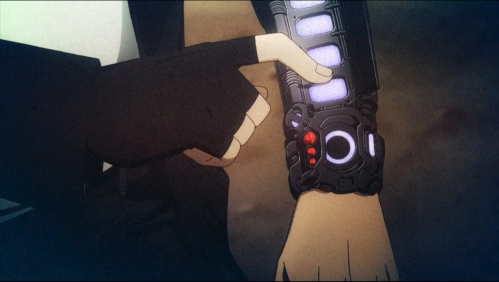 Our main character is a Japanese student… Aw, you gotta be kidding me!! Again? This better not be another Mahou Sensou!

Our main character is Shiba Tatsuya, a Japanese student of a prestigious magic oriented school where only the elite is accepted. But, sadly, our hero is actually part of what is called Course 2. You see, the students are divided in two groups, the Course 1 and 2, both of which we will call by the informal names of Blooms and Weeds from now on, respectively being the ones with big practical talent for magic and the ones who only have a chance by studying  the theory. Basically, the Blooms are great and receive all the priority while the Weeds have shittier classes and are looked upon with disdain.

So, Tatsuya is a loser who lives alone with his extremely powerful and talented sister, Miyuki and I’ve seen that before way too many times… She is about perfect and still loves her lame brother with all her heart. Well, it’s weird but better than if she was a bitch. I guess. Right?

Something that immediately catches my attention is the fact that they are very close siblings. With the romantic song in the background, I would say they are, in fact, WAY to close siblings.

During the opening ceremony of the school year, it gets very uncomfortably clear that the two student’s groups (Weeds and Blooms) are kept separated. If you think it was bad enough to see Malfoy calling Hermione a mudblood in Harry Potter, here the whole school organization feels the freeking apartheid regiment. It get’s borderline stupid, but they hold it down well enough for me to ignore it.

Tatsuya then starts making new friends. Right of the bat, he meets Chiba and

Sorry, I lost myself for a moment there.

I have to say, even the characters notice the name issue here. Tatsuya is called Shiba, so, together with his new friends, they form the name Baka Kombi of Shiba, Chiba and Shibata. That’s creative in it’s own way.

And here comes another fraternal meeting between the Shiba siblings.

How come this looser gets so much attention from this wonderful girl? It makes no sense. Nobody at this school,  besides her, admires him. For example, the next day he goes to exercise a little and when then he gets in the dojo where he practices martial arts and is received with this absurd beating:

Ok, I haven’t been quite honest with you guys. Throughout the whole episode it gets more than hinted that Tatsuya is just awesome and that he has a very important past but something happened and now he can’t use his powers or show that he is immensely strong even without them. Being honest, so far I really like this character and HE is what makes this series very interesting for me. He seems smart, strong and still gives a legit feeling of nice guy.

My only real worry comes from the Blooms elitism. Like, they complaim when Miyuki wants to eat with HER BROTHER because he is a Weed. Dude, can’t you see that they love each other very much? In a totally fraternal and innocent and no-creep-at-all-way? 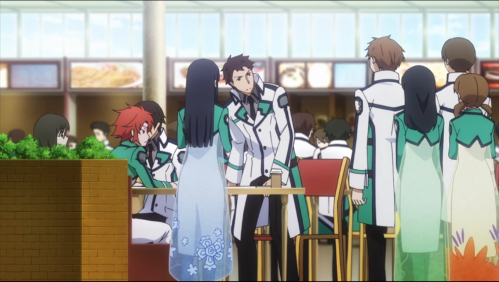 There is an important context to pass for this story to be really effective: The WW3 ended but the world still in a thin peace. Much like during the Cold War (and I am pretty sure no one reading this actually remembers it), there is a lot of pressure to stay ahead of the other countries. With that background, it is a lot easier to understand why people take being good at magic so seriously. But sometimes it does feel kinda excessive.

The first episode ends with the main character solving things. And that is pretty much a good way to sum the basics of this anime so far. The main character is active and he deals with the problems that get presented by the story. I really liked the beginning of this series and I am likely to watch it all the way. Let’s hope it keeps delivering the good stuff and, to this point, I strongly recommend it.

But don’t forget that this is just the first episode!

This entry was posted in Anime and tagged Anime, first episode, Mahouka, Mahouka Koukou no Rettousei, Review. Bookmark the permalink.