After the Arland trilogy, this one marks the beginning of the new Dusk series. However, it was one of the worst received games of the series in the U.S. and this was probably because of it’s lack of Japanese voice acting. While the American dub was not bad, many players claim their acting is not as convincing as the Japanese ones. There’s also a talk about the localized version not being fully-voiced, but I didn’t confirm this, since I didn’t actually play the translated one for the PS3. Yes! I was one of the annoying bastards who bitched about the dual-audio thing, and it seems like I was rewarded with this remake for the Vita! Everything about this is so convenient for me that almost makes me feel bad for it (being “almost” the key-word here). So let us ride to see what new world awaits for us in this new Alchemic adventure! 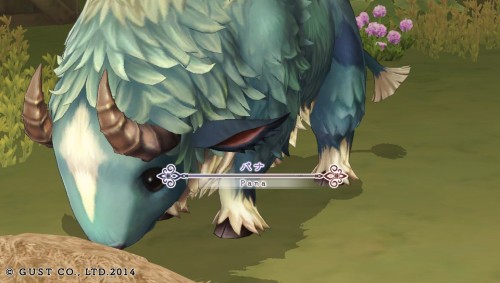 Well this game has been out since 2012, so it’s story should be nothing new for fans, that’s why I will just give a quick look for the people who didn’t play it because they are new to the series or are just as assholes as I am…

The game starts with Ayesha Altugle doing some reckless mix on her caldron, but for everyone’s surprise, the thing don’t go boom! This is because she is a surprisingly skilled… “herbalist”? That’s right, the alchemy in this world was long forgotten, and Ayesha – who lives far away from most towns – learned this art from her now deceased grandfather, who deceived her into believing she was just learning how to mix herbs to make medicine. This results in her becoming one of the best pharmaceutics of the land. Unknown to her, her family has being protecting the ruins next to her house, which is fulls of old alchemy vestiges. This ignorance led her little sister Nio to disappears there while looking for herbs. Many people say she was abducted to the lands of the gods, but Ayesha is a bit skeptical about this…

This is until she sees a brief apparition in the form of her sister. She is oriented by a mysterious man called Keithgriff Hazeldine (Keith for friends), who also witnessed the whole thing and decided to lend his help, just out of curiosity for Ayesha’s abilities. He is actually one of the most wanted man in the world because of his highly destructive alchemy techniques, which he uses to destroy old alchemy-facilities he considers to be dangerous.

That’s because the people of his home-land had done unforgivable things with the power of alchemy, and Keith has taken upon himself to clean the world of the evil of alchemy, even if this makes him into a villain. But this doesn’t mean he  is against all forms of alchemy, that’s why he will also be constantly analyzing Ayesha’s progress through the game, as she becomes more and more skilled in the old arts.

The Atelier series always felt like a Galge, this one is no different, it even could be specified as a “charage”, but A DAMN GOOD ONE! While the plot is not overcomplicated or too epic, it is interesting and well-paced, with the focus being on each character’s own quests.

However, I believe the Arland series had focus on the male audience, since the story’s pillars were over-powered women who were the best at anything they did for no good reason, had everything for granted and never took anything seriously, causing trouble for many people just for their own selfish reasons, something we constantly see on nowadays Galges. That’s because men enjoy god-like women who humiliates and dominates them…I suppose.

The tone is completely different for this series. Every character has at least something admirable about them, and there’s no one trying their best to make others look stupid, which culminates into making every single new friend Ayesha meets during her journey being very interesting.

This doesn’t mean the characters are completely different from the Arland series. For example, Marietta is really into old gentlemen, that is why she has a thing for Keith…

Keith is also the closest thing Ayesha has to a master, and while he involves the protagonist into a couple of troubles, he actually helps her solving it! Much different from Rorona’s master!

Keith is a reliable and responsible nice guy, and he is not the only one! There’s an extra effort into making male characters more active and cool than the previous series, which is why I feel like this new series thinks a bit more about the female public. 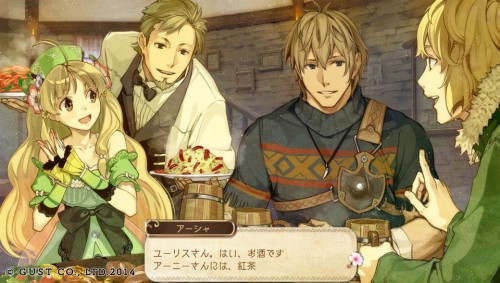 However, this doesn’t mean the females are the inferior ones now, everyone feels equal, with their own weaknesses and strengths. 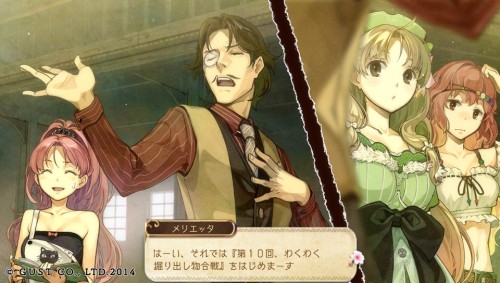 The battle system is still a simple turn-based one, but now there’s a positioning system in the mix, which makes things a bit more strategical. It is enjoyable enough for the amount you will be battling in this game, which is not much!

This is not to say it’s a bad thing! The main focus of this series is still Synthesis, which means players will have lots of stuffs to do on Ayesha’s many workshops (one for each town).

By the way, a lot of things about alchemy became considerably easier and much more user-friendly, with an huge illustrated list when doing alchemy, a basket that never seems to get full (believe me, I tried!), requests with long dead-lines and a extensive period to complete the main quest.

But what is new for this Vita remake? Now you can dress Ayesha with many different clothes, which seems to be a common feature for all Atelier remakes. However, I just got 2 extra clothes for Ayesha and one for Linca and Wilbell. It feels a bit lack-luster and I don’t know if you can get more.

Additionally, all DLCs from the PS3 original is already included on the original package of the Vita version. Unfortunately, they matter as little as before, since there’s no additional events or specific endings for them, which means it would be just a waste of time to raise their friendship level.

The graphics are as beautiful as they were on the PS3, but the lip-synch is stills AWFUL (with caps lock, to express how horrible it is!), and by playing Ar Nosurge – GUST’s latest game – now I know it will not get any better on the next game either. Even so, the animations and expressions seem much more vivid and natural than the ones from the EXA_PICO games, although this had consequences, as the game’s load-times can be a bit long, but not on the same abusive levels as Sen no Kiseki and others 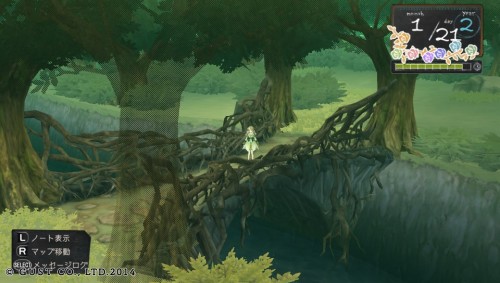 As I said before, the game feels like a Galge, this includes a bunch of CGs for important events, the difference here lies on the quality, because Hidari’s art is superb! It’s very hard to find drawings that are THIS good looking on your average monthly-list of LoveSims. 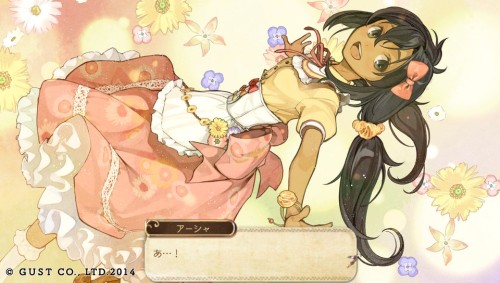 The soundtrack is really great. It uses flutes, pianos and violins, which creates a mystic and yet elegant atmosphere that fits the game perfectly. The people involved in the composition worked for many other GUST games, like the Ar Tonelico series, so it’s easy for fans to find familiar tracks.

The voice acting is fantastic! I don’t know about the English voices, but I can say for sure this game is worth just for Nakata Jouji as Keith. Don’t misunderstand me! Richard Epcar has a cool voice that fits the character, but he just isn’t as cool as old man George! 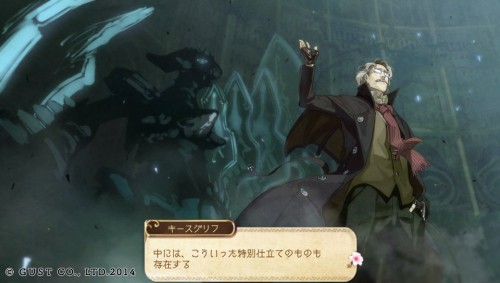 I love this game, so I am sure I will love the next chapters as well as long as they keep the same treatment with their characters and plot. Talking about the next one, I will be playing it’s localized version, because they add dual-voice this time. Who would have guessed? The lesson here is to always be an asshole by complaining about every single stupid thing you don’t like, because maybe, and just MAYBE, your dreams might become true!