Today I will do something different: I will review an Anime theater movie. And one based on Togashi’s great HunterXHunter manga no less!! And I will not do the old “did I like it” routine this time. Please, by all means, go on knowing my opinion about this movie. I had never disliked anything related to HXH. There were things I hadn’t liked, but never really felt like any of it was bad. Until this movie… I hate it!

And to fully explain why, I will have to make some Spoilers about an awesome story, please, if you have not seen HXH yet go read it (or watch it). 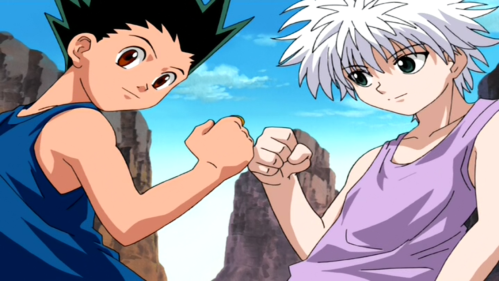 Our two main characters – we actually have 4, but those two are the ones we have been following the most in the series – are Gon Freecs and Killua Zoldyck. They are friends despite being very different: Gon is a honest kid with a free spirit and a very direct aproach to life while Killua is the son of an assassin clan, being very smart and manipulative, a good liar and very ends-matter kinda person. More on them later. 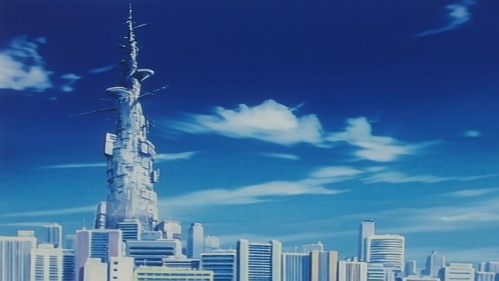 We start the movie going back to an old fan favorite of the series: The Tenkuu Tougijou. Also known as the heaven’s arena, it is a tower with 251 floors where martial artists beat the crap out of each other to move up to higher floors where they get better money prizes and more glory. The main characters are at this place to watch their friend Zushi fighting in the Battle Olympia. HOLY SHIT! Zushi got way stronger! 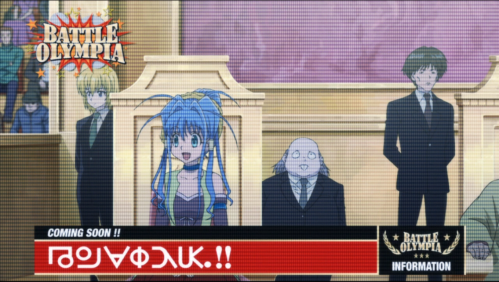 Only celebrities can attend the… Wait, is that Neon? Good to know she is doing fine. I hope her father is not doing too badly. 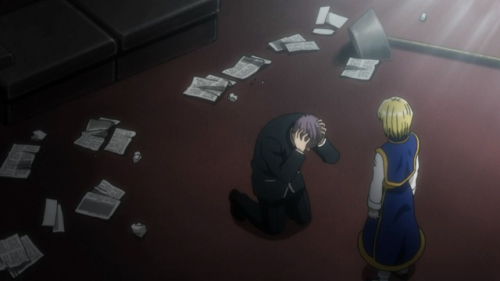 In a great coincidence, Zushi’s medical trainer is Leorio. Yes! Leorio is great! One of the best characters in the series! 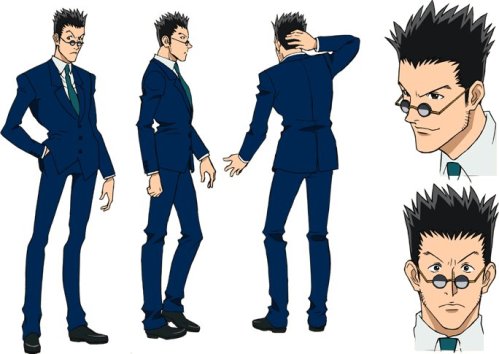 Even though he is seen as sorta comic relief for the group, every fan knows Leorio is a great character, full of energy but also very smart and reliable, Leorio is responsible for some of the most awesome moments in the series! He is my second favorite character, only behind Gon! What awesome thing is he going to do in this movie? 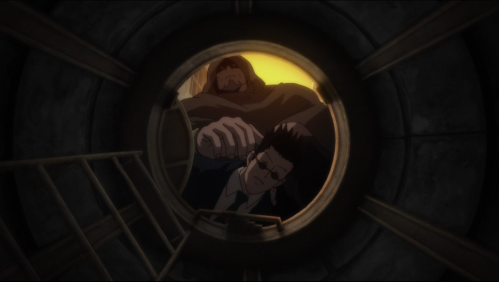 … sigh… So, you took a huge fan favorite and used him to “Bleach out” your villains? Really? I mean, he is the weakest fighter of the group at this point, but.. this should make beating him even more useless for the villains! And if their plan is to kill all hunters, why not KILL Leorio? Did you really have to toss him into the sewer, movie? 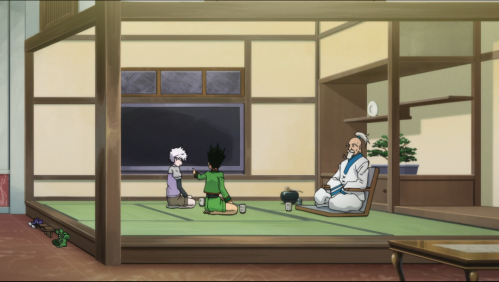 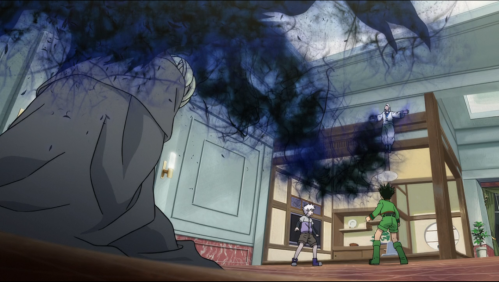 And then the enemies strike. One girl – I think – commits suicide to ignite an ability that locks the chairman. It fits very well – finally – since it has been explained before that Nen doesn’t necessarilly dispel because the user died, many times it gets stronger and even Netero can’t break Nen just because, after he is been affected. Now, he is taken prisioner, the arena is taken hostage and the local defense mechanisms are all under enemy control and the protagonists are thrown out of the window – which makes their previous presence pointless, thank you movie…

The exposition explains that the villains are part of an old hunter group called Shadow – cliché evil name, check – and Netero got ridden of them in the past. Now, revenge! 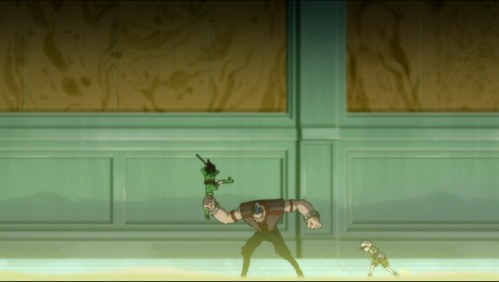 So, we have a long sequence of shonen obligatory fighting. Between those scenes we learn that the power used by the enemies in the movie is called On (means Malice) and is the power of vengeance fueled by hatred. It is the opposite of Nen and… if you know Hunter x Hunter enough, you are probably confuse. 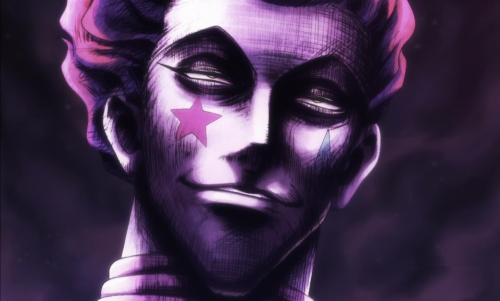 You see, there is an aspect of Nen that really conflicts with this whole On stuff: It is supposed to be the opposite of Nen, based in hatred and malice. But NEN is influencied by your emotions, INCLUDING HATRED AND MALICE. Nen is not the power of good, because HXH is not a good x evil tale, it is gray and the power used by good guys IS the power of the bad guys, Nen is not based on your Midichlorians! 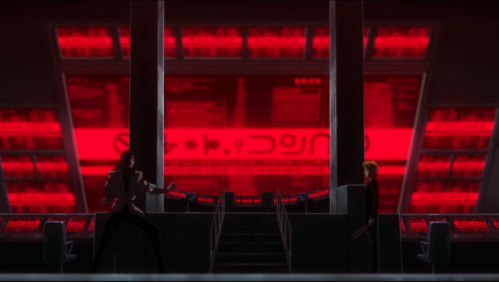 They also explain that On has conditions that are based on a contract made when you learn it and that, if not followed, will kill you. Which is like conditions used for strengthening Nen. On also gives you 100 % of every NEN category, which resembles Kurapika Scarlet Eyes. So, basically, everything about this opposite of Nen, is freaking Nen! All of it is even used during the main series in some way. 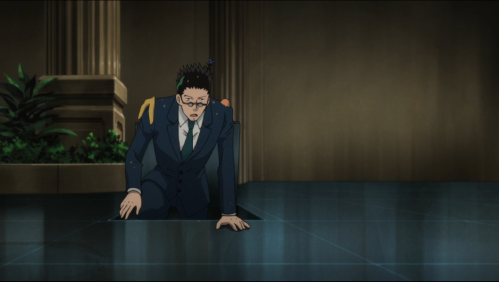 At least we have Leorio out of the sewer… wait a minute. You thrown him in the sewer out in the street, right? How the hell did he get out in the 50th floor of the tower? Just… how? Am I the only one seeing this? 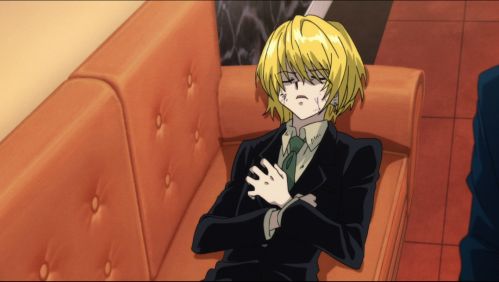 After Kurapika gets infected with the On, Gon has no alternatives but fighting Jed, the leader of the villains. And to do so, he makes a contract with On. By his own will. Yea… 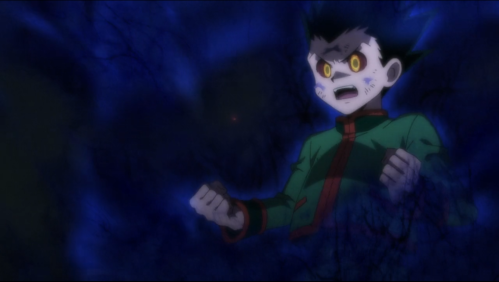 No. No. This is so out of character that it hurts. Gon is the kinda guy who would die for his friends, but he is NOT the give up and go for the dark side style of character. He is really stubborn and he doesn’t give up. He is kinda dumb but he would not do the exact contract he is trying to save his friend from! ARGH!!

And Jed wants to force him to fight along with his group of vengeance killing the hunters who cannot accept the On. One of each is Kurapika, who is a friend Gon has to protect for his contract with On. Or he dies… Stupid much!?!? 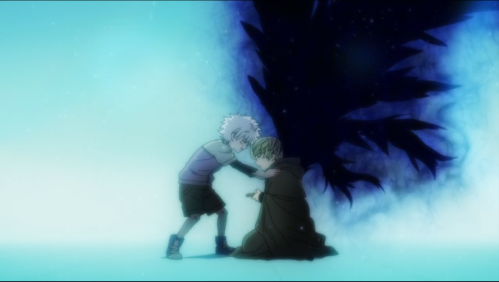 And let me remind you that by this point in the story, Killua had that freaking needle in his head that would make him knock Gon and run with him as soon as he noticed Jed was too much for them. But no, he goes all the way hero mode instead, talking with the dead girl and convincing her hateful On to stop what she was doing… 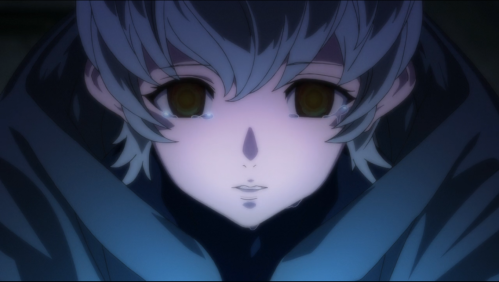 So, the one moment in this movie I liked, is ruined. The post death hatred keeping her “Hatsu” working is dispeled because Killua asks her really politedly. She died to do that, do you realize how much will power that girl had on this mission?

Netero proceeds to defeat Jed, as expected. Oh, before I forget: 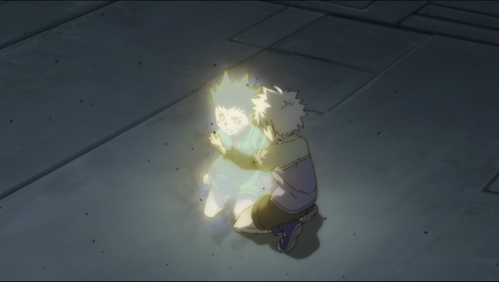 Don’t worry. Gon is fine. I can’t even understand what was the big deal. Kurapika could make the damn contract after all. Killua just had to say friendship-bubble and he would be safe after all. And Gon even is the one to finish Jed with the old “plans don’t matter, just Shonen Punch him”. Again, completelly out of character with how Hunter X Hunter usually goes. 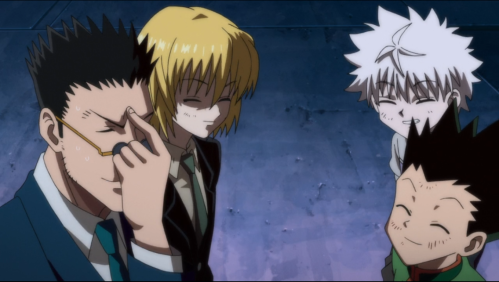 To rub a last salt in my wounds, the friends of Leorio make fun of him being useless and doing nothing in this movie. I can barely hold my desire to laugh movie, you are so funny! 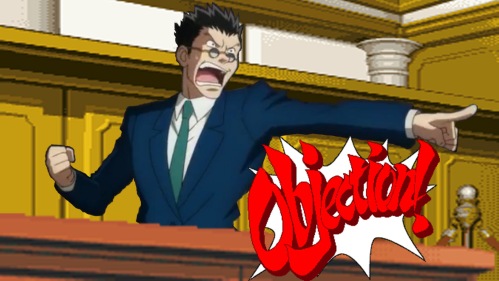 This movie really made me mad. It is a bad cash-in of a series that I love and it had all the tipical problems of this kinda shit. It even had the same guy behind the script of the TV series working the script here, but not even that stopped the mess the story ended up being. The characters made a lot of stupid uncharacteristic stuff, Leorio was useless comic relief and HISOKA of all characters just spent his time walking around being… helpful I guess… That was bad! Avoid this movie and go read the manga or watch the TV series, this shit will only make everything harder to understand later. Just… just… ARGH!!!