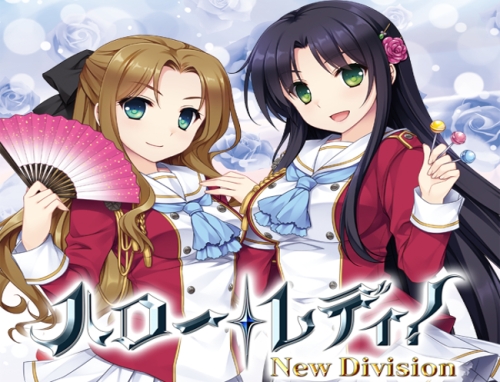 A fan disc by Akatsuki Works? Such a rare phenomenon! It comes to show how proud they are with their recent success: Hello Lady! And it’s not for nothing, as Narita Shinri was the first (non-trap) protagonist on Galge’s history to get 1st place on popularity poll! Also, as you play this FD further, It gets clear why the original game was sooooo goooood….but, wait!

Aside from an artbook full of artwork and sketches, the package also features a Drama CD, which means this will be the first time I will be reviewing one of those things! YAY! For my first time reviewing this media, I bring you…nothing special at all! The CD tries to be a parody of the popular Blazblue net radio (bururaji), featuring many of the same segments in a show called “Perrucheman Show”.

Well, I guess it’s normal for this company to be inspired by a popular shounen battle game like Blazblue, since they also were inspired by Hunter X Hunter when they came up with the concept for this game’s supernatural powers. Also, both Akatsuki Works and Arc System Works got “Works” on their names, so I guess those guys must be thinking they are cousins or something… 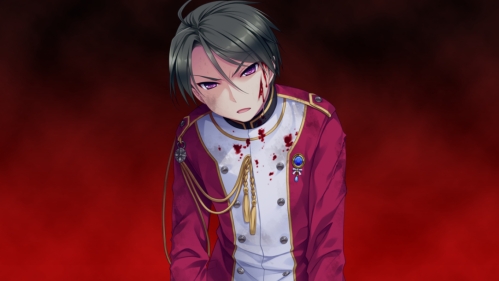 The big difference between the two shows is that everyone is IN CHARACTER on this one! There’s even a mini-plot going on as the program goes on that involves the recurring joke of Shinri not getting a bigger role. Hahaha! He’s your most popular character by far and you guys are depriving him from a chance to participate in this Fandisc? Such a genius idea! I wonder how is the sales for this thing going. There’s also some serious advertisement for other Galges that really exist and are not from Akatsuki Works

Anyway, the game on this package has two stories that consist of routes for Hishia and Mitori, who were popular and important since the first game, so I don’t know why they didn’t get their own routes in the first place. Maybe it was left on the cutting room floor… 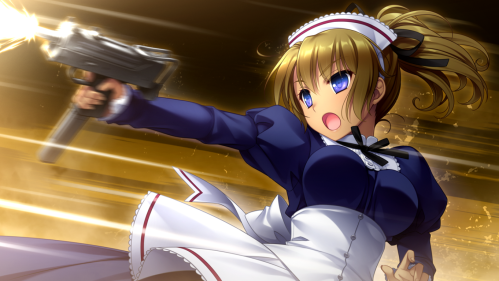 This game is a direct sequel featuring only returning characters, so I will not waste anyone’s time explaining who those people are. In any case, read the review for the original Hello Lady if you get confused.

Both scenarios start right after the second opening. You even get to watch said opening. Mitori’s story takes place when the SCHOOL (God! I forgot how lame the name of their academy is!) is trying to eliminate Mitori after she showed signs that she is turning into an Onslaught!

Ok! Seriously now! If you played the first game, you should know this term basically means she is turning into a Berserk (And, no! I don’t mean Guts or Heracles, either!). Since this transformation is kinda secret (but not really), Mitori needs to be erased, and Narita would never allow for a lady with such bright possibilities on her breasts to die before him (Yes! This actually is his motivation), so he vows to protect her with his life.

Unfortunately, being an Onslaught also means Mitori gets an insane power boost…and she also gets insane! 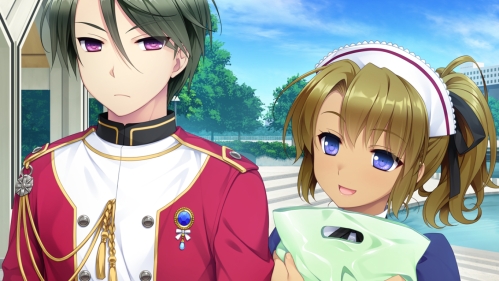 The first part of this story features Hishia’s point of view while she helps her master to exact his revenge. The second part shows a bit of Hishia’s past, explaining how and why she became Shinri’s maid. The third part have some sweet scenes with the two falling in love with each other while they make preparations for the final part of their plan. 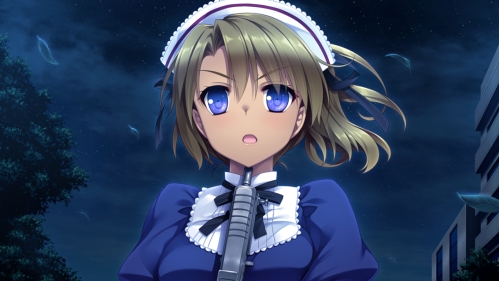 Finally, the climax features a huge fight-scene in the SCHOOL, finishing it with a romantic epilogue.

Akatsuki Works have that annoying tradition to set a specific order for each route to be played and unlocked and this Fandisc assumes you played through every route from the original, and you better do it, or you will get lost in a lot of things here! 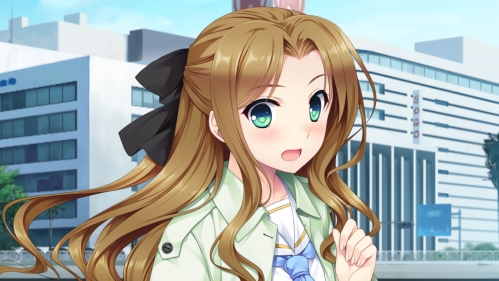 Mitori’s route is a mess! Shinri goes out-of-character here! He was obsessed with his revenge and didn’t hesitate to leave behind or even kill those who prove to be a hindrance to his plans. However, this scenario have Narita Shinri willing to die just to protect Mitori, whom he doesn’t even know too well. Why? That’s because he falls in love with her…all of a sudden!

I don’t really get the feeling this romance got a decent building up. Specially when the whole thing is 75% action and plotting, which makes every romantic scene feel out-of-place instead! The ending sucks as well, as it has no real closure and it feels more like a bad endings…

On the other hand, Hishia’s story is superior to Mitori’s in about everything! The building up for the serious plot, romance, final battle and epilogue is well divided into even parts, and the development was the only ending in this series that was not too sudden and without a real resolution. Actually, it can even be considered as an alternative True Ending for the first game. 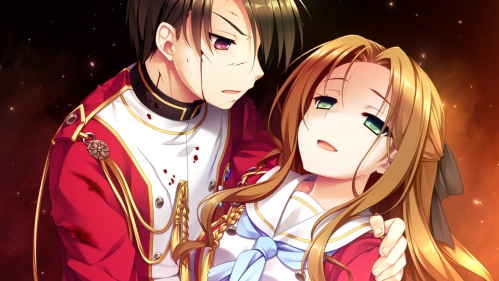 Playing this game made me realize how pitiful I was back when the first game was released, since I got so mesmerized by everything in it. Now that I played my Legend of Heroes and my Guilty Gears, it’s easy to notice the many weak points in this game!

Yes, Narita Shinri still awesome, but aside from him, there isn’t anything exceptional about this game’s setting. The few interesting elements are poorly used or don’t get too much focus. For example: This game is supposed to be a DatingSim, but we don’t actually see any decent romantic development on the original, because it feels like everything else in the plot is rushed for the sake of more “chuunibyou” fight scenes. 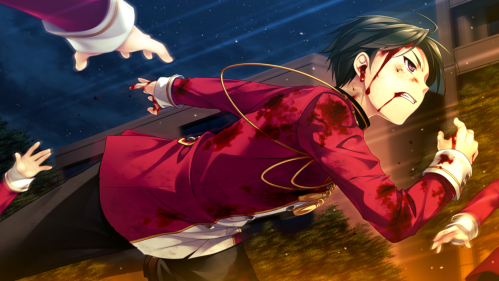 Hey remember how XBLAZE used about 10 different CGs to depict an exchange of attack during a fight? I sure do! This kept the game on a good pace, which kept the story interesting. The whole fight didn’t take too long to end (about 5min.) and they didn’t force you to read through long texts of explanation, just so you could get what was going on. And yet, that was only “ok”. But what do we get here?

Oooooh! A single blurred CG with lots of lousy sound-effects for the whole fight-scene that takes more than 30 minutes to end! This definitely isn’t…”ok”. If you watch anime, movies or read manga regularly, chances are you will find action scenes in Visual Novels to be really boring! This is the case for me. I can’t keep my interest in a fight while I mostly read a description about it, it’s silly! Hello Lady doesn’t do anything special with those scenes. 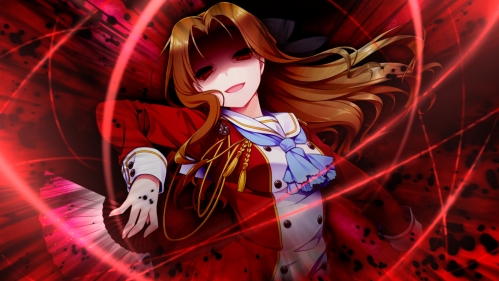 I got tired of this CG after 5 minutes looking at it, and they keep reusing it for the entirety of Mitori’s route, which takes about 4 hours…Nice!

Hey! Remember when King Leo Whitefang from Illyria joined forces with Johnny – leader of the Jellyfish Sky-Pirates to defeat the bizarre Bedman? I sure do! That was really cool!

Know what is also really cool? Not this, for sure! 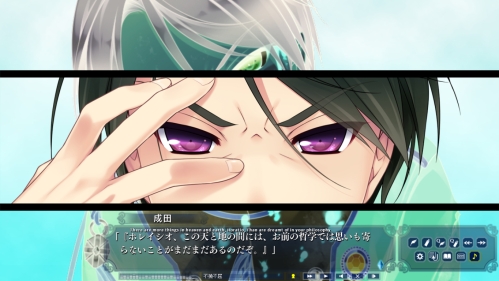 This same scene, over and over again! There aren’t too many new CGs in this FD. Most of the CGs you find here were recycled from the first game, and I don’t like that!

And the voice-acting during the above scene: Really shitty! Did they need to use chuunibiyou Engrish here! It ruins the serious mood! It’s so bad that almost sounds like the seiyuus are doing it on purpose! That aside, the voice-action quality still good as the last one. 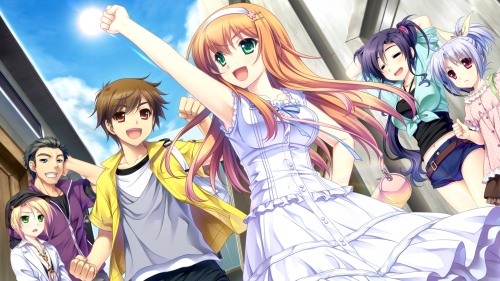 It’s ok! At least, it’s infinitely better than the soundtrack from “& – Sora no Mukou de Sakimasu you ni”. 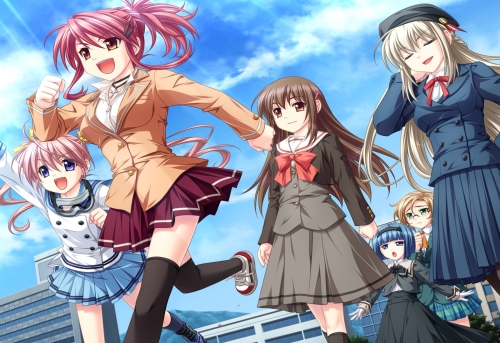 “Rui wa Tomo wo Yobu” was this team’s first work and their best one, as well! It also featured special powers, but those were for investigations instead of direct fights (like Jojo!) which works quite well on a Visual Novel. It wasn’t for nothing that it was the first project from Akatsuki Works to get a Fandisc. Saddly, Hello Lady is really good, but not on pair with that previous title, this is true even when you compare their Fandiscs! This FD was so…empty! 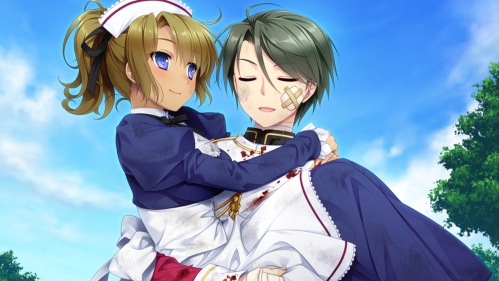 I’m still waiting for better days in this genre! Who knows? 2015 may grant my wishes!