In a distant future, AIs became so advanced that robots finally managed to surpass human inteligence and even acquired emotions, which inevitably led to war between the two races. As their final hope, humans released a special type of nanomachines programmed to wipeout their enemies. Ironically, their ultimate weapon turned against them, since they were in too much of a hurry to make all the necessary tests with the new weapon, which came to be known as “the apocalypse virus”. 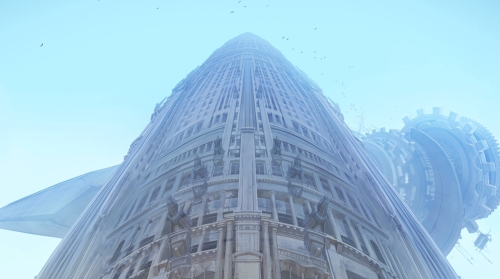 Many years later, a small portion of what once was the gigantic human society struggles to live in a desert land with near to no resources, but not too far from one of the communities, there’s a tower known as the “Demon’s Castle”. Unknown to them, the tower is actually an old facility to create robots. Kaminari Ryuunosuke is the sole human living there. He is a brilliant scientist who was raised by robots to become humanity’s true final hope.

All the misery from the outside world didn’t exist inside the Tower, thanks to the miraculous technology of the old world. The only thing worrying Ryuunosuke was loneliness. He tried to make contact with the near community, but he was just a suspicious outsider to them. In order to be accepted, he gave his all in a research to develop a new type of sunflower that could withstand that harsh environment of the desert, which proved to be a difficult task, as he failed over 40 times. Things were not going well on the community either, as people failed to understand the benefits that Ryuunosuke’s research would bring to them.

Desperate for a companion who could comprehend and help him, Ryuunosuke awoke two androids under the pretext that “he needed someone to practice his social skills”.

The first one to be awaken was named after the protagonist of Alice in Wonderland. Since the two robots were revived by using any compatible component, Alice’s psyche didn’t corresponded to her body. She had the body of a “sex bot” with the mind of a child, as her base AI program came from a toy known as “Princess Doll”, which was a companion for little girls.

The first contact between Ryuunosuke and his first robot partner was the worst possible! The Princess Doll program overcame the Maid program installed by the mad scientist. Therefore, Alice became arrogant and childish, refusing to listen to Ryuunosuke’s orders. They argued for days, until Alice finally tried to kill him.

By activating the 3 laws of robotics into Alice, Ryuunosuke was able to assure his safety, but this was when his male instincts kicked-in and got the best of him. Ryuunosuke became unable to resist the female charm of Alice’s absurdly sexy body, subsequently leading to him raping her.

Naturally, After taking such an action, Alice got even more aggressive towards Ryuunosuke, forcing the scientist to trap her inside a room for a while. All alone again, Ryuunosuke decides to try once more with the other android:

Dorothy, whose name came from the heroine in the Wizard of Oz. This time, his interactions with the new robot were the complete opposite from what he had with Alice.

She pledged complete loyalty to Ryuunosuke, fully acknowledging him as her master. She even protected him against Alice, so it wasn’t necessary to imprison her anymore.

Ryuunosuke was satisfied at first, but he noticed something off with Dorothy. She was too cold, so he tried to get closer to her. Before he could notice, he exposed his gentle side to her. Ultimately, the two felt sexually attracted toward each other, leading to Ryuunosuke’s first sexual experience with mutual interest. 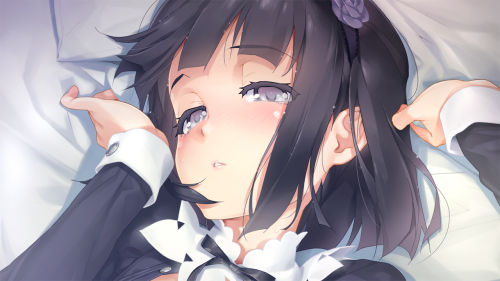 Eventually, Alice became lonely. She tried to turn Dorothy against her master, to no avail. Little by little, she became less aggressive and her attacks reach the level of mere pranks. She was desperate for company, much like Ryuunosuke in the beginning.

By noticing that, the scientist felt horrible about himself and tried everything to become friends with Alice, but this only backfired, as she left the castle in humiliation. After many hours walking on the desert, Alice was on the verge of her death, but Ryuunosuke was able to find her in time and he begged her for forgiveness.

From this point on, the 3 were not just master and servants, they became a real family. Ryuunosuke was happy from the bottom of his heart for the first time in his life, and now he wanted to share this feeling with other people more than never, which made him focus on his research even more than before.

However, something horrifying was about to happen in the near community: A new inquisition to hunt demons disguised as humans, the so-called “Robots”.

I can’t find enough words to describe exactly how impressed I am with this game’s setting. It’s so good! I actually cared for these characters, and this is so rare to happen in an Eroge! This is thanks to their flaws, which made them look human.

Ωstar is not afraid to show you the ugly side of things, like when Alice gets raped and her later attempts to murder Ryuunosuke. This isn’t presented as a comical event like it would be if this were any other Galge. There’s a dark atmosphere about it that makes you feel terrible when watching those scenes (Well, at least I did!).

The characters are certainly one of the main strengths in this game, specially the hero! He has a unique look and personality, he got a comical side with his chuunibyou antics, but he also pass as someone truly intelligent in the way he uses logic to analyze everything but without forgetting feelings and creativity.

That’s why when he makes references to famous scientists and writers, it doesn’t feel like something pretentious that the writer took from his ass. It seems both character and writer understand what each reference means. To create super intelligent character that are convincing is much harder than it seems, but this writer totally nailed it! 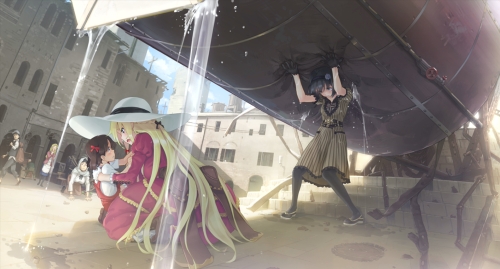 Naturally, heroines are very important for any Eroge. Thankfully, the girls in this game are at least as awesome as the protagonist! They are not just one-dimensional stereotypes with one or two fetishes stuck on them. These girls have all sorts of feelings, they get angry, envious, sad, confused, and many other negative feelings, which is why their positive feelings feel so genuine later on!

“Romance with Robots” is something that was never appealing to me, as I don’t find anything romantic about someone creating something to have unconditional love for its creator from the start. But this story is so well written that it became an exception to this. After all, Ryuunosuke didn’t create the girls…

At least, this is what he says, but this changes from time to time. In some occasions he says that he just fixed them, sometimes he says they were incomplete and he finished building them, but later, he says that he created them from scratch!

This inconsistency made me suspect that this was one of those Eroges with 4 to 5 different writers, but that’s not the case. Kichijyouji Dolores is the only writer in this visual novel, as it has been for all the series.

But that’s ok! No one is perfect. Likewise, this story is not free from its own silliness, like the fact that the 3 laws of robotics are not always active, and they can only be temporary “activated” with a key-word (which Ryuunosuke humorously chose to be “The Lord Of the Rings”, because it kinda has the same initials). Well, this is not nearly the most stupid thing I’ve seen in Japanese media involving robotics and AIs (I’m looking at you, Fate/Extra CCC!)

I believe this game would still work as an all-ages title, since it has such a good plot and characters, but for now, it’s undoubtedly a Nukige, and once they get started on it, it gets difficult to forget that you’re playing a game for “onani-purpose”. At least, the H-scenes have some interesting dialogs for once! Sometimes it’s just sweet-talk, but there are occasions where there’s a bit of character development during it. Much different from the usual Galge, which has the heroines mostly saying “AAAAAAh! OOOOh! Kimochiii!” all the time… 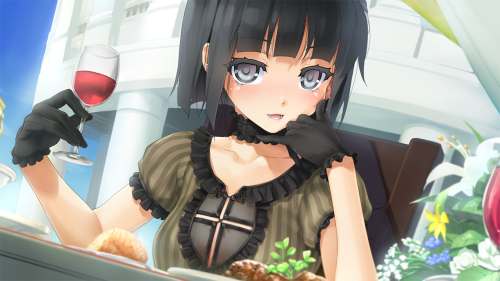 Happo Bijin grace us once more with his high-quality drawings. His Art is among the best, if not the very best in the Visual Novel industry. Each character have distinct faces and there is a fair amount of facial expressions for every character. The Victorian fashion is used with accuracy and each color is chosen with great care, in order to fit the characters and the backgrounds. Well, the breasts still look damn weird when they got those ridiculous proportions, but I guess this will never look “natural”, no matter who is drawing…

There are some animations as well! There’s a tradicional frame by frame animation of Ryuunosuke riding his chariot towards his tower (which you have the pleasure to watch everytime you start the game). There are some H-scenes with some fairly decent flash animations and even some CGI for flashbacks and scientifical stuff.

Even the backgrounds are beautiful, full of details that make them feel alive! Each one has something interesting going on, like the remnants of a giant battleship on the beach. Quite the eye-candy! 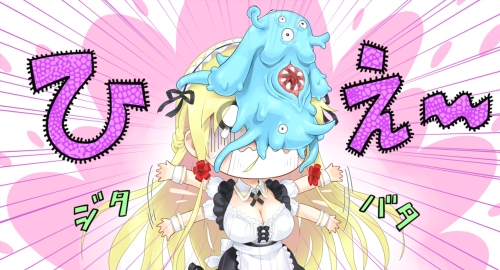 There’s nothing bad I can say about the visuals! The game is already worthy for the art alone! It’s just amazing!

The seiyuus gave their all and I got the feeling that they were really into it, like Ueda Akane. I’ve heard her voice in other titles such as Otonari Koi Sensou or Baka Moe Heart, but she never sounded as great as she sounds in her role as Alice in this game. Even sub-characters in the village have good voice actors. Nevertheless, when it comes to something more dramatic, like crying, the acting suddenly starts to feel a bit lacking. Still, it’s quite an impressive feat for seiyuus of this level.

They use some free-licensed tracks, which also includes some classic music. The rest of the BGMs are a bit above the average, but not enough to become memorable. And honestly, with this many public-domain tracks being used, I’m not sure which track is an original piece.

Even though I wrote this huge review, this chapter of Bishoujo Mangekyo is still a pretty short game, like its predecessors. All the same, it’s an excellent game, and since it’s so short it doesn’t hurt to check it out.

The monster in the first episode of the series was a vampire, the monster from the second one was the “oneself”. This time, I believe it was humanity itself. I’ve seen this theme being well used in many other great stories, but this one was also very effective and interesting! 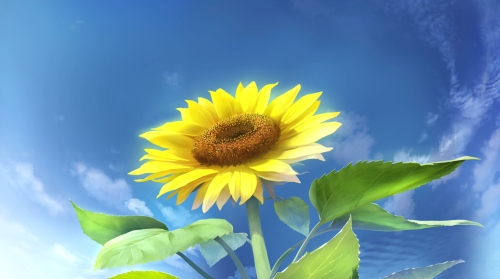 This is the first episode in the Bishoujo Mangekyo series that has more than 1 single heroine, and for some reason, this also means there are more than one “true ending”. This is quite confusing, and it’s really sad that the Harem route doesn’t seem to be considered canon. I love both heroines and I want everyone in the story to be happy.

Which will be the theme for the next episode? What is the connection between Renge and Natsuhiko? I hope there are more games that give those answers, as this chapter ended on a weird note…

This entry was posted in Galge and tagged Galge, ωstar, Nukige, Review. Bookmark the permalink.