Half Persona, half Pokemon. It’s impossible to deny the inspirations for this new Digimon game. Although it’s not the most original concept ever, Media.Vision still managed to give their own spin to these formulas, and each element keeps being enjoyable. It’s not for nothing that this game sold so well in Japan and it’s very likely that it will get localized eventually. So here is a review with the most important things you need to know about this great game:

In this world, a new system called “Eden” makes it possible for people to navigate through the internet by converting their own memories into digital data, which creates a complete immersive experience that makes the user feel like they are being transported to a new world and by using a special control called “digivice”, they can visit many other homepages. Of course, hackers still exist in this new “world”. They use a creature-like program known as “Digimons” to destroy any protection and steal any code or information.

An incident where a group of kids get invited to visit an abandoned domain in the Eden network becomes a trigger to many world-changing events. They enter in the forsaken “Clone” area, where they met with an unknown entity who install a new program in their digivices: The “Digi Catcher”, which grants them the ability to capture Digimons lurking around the most obscure areas of Eden.

However, a disturbing creature known as “Eater” stars to attack people inside Eden by consuming their mind-data, which puts them in a vegetative state. One of the children who became a “Digimon Tamer” is nearly devoured by this monster, but on a desperate attempt to escape, a miracle happens and the child’s mental data breaks the dimensional wall and appears in the physical world.

After making an alliance with a private detective, they start to investigate “Kamishiro Enterprise” – the company behind the creation of Eden. They suspect Kamishiro to have something to do with the Eater, but their investigations reveals much more than they could expect… 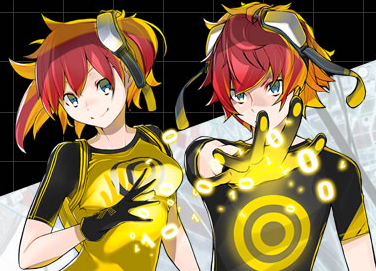 Aiba Takumi (male) or Aiba Ami (female) is the protagonist who is attacked by the Eater at the beginning of the game and becomes a half-digital being by accident. This form grants the ability to dive into any device and freely navigate through any network at will, which becomes an important resource for their investigation. Thanks to this power, this young Digimon Tamer receives the title of “Digital Detective”. For always being positive, calm and persistent even during desperate circumstances, some believe that this child has the power to go against destiny itself.

Much like the protagonist, Shiramine Nokia don’t know when to give up, either. Unfortunately, she isn’t calm or smart like the main character, being more of an impulsive fool. Therefore, she isn’t suitable to work as a detective, but she usually tags along during certain jobs, anyway. She is one of the children who received the “Digi Catcher” program together with the protagonist. She was also the one who would be consumed by the Eater, but she was saved by the main character who stayed behind to build time for her to escape. Even since, she feels responsible for what happened, so she uses her charisma and charm (?) to form a new team of Hackers to prevent that the same thing happens again and to protect the Digimons. She always have Agumon and Gabumon at her side to help her. Those two are always loyal to her, since they feel something nostalgic about her… 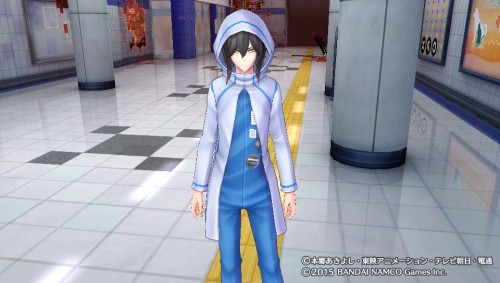 Sanada Arata is another of the protagonist’s online friends who becomes a Tamer. He’s a bit older so he tries to be a reliable big brother for the main character by lending his hacker skills during investigations. Nokia feels attracted by his good-looks at first, but since Arata acts cold towards most people (specially Nokia, who is “just a bit” dumb) she gives him the nickname “daken” which is short for “dame ikkemen” (good-for-nothing handsome guy). 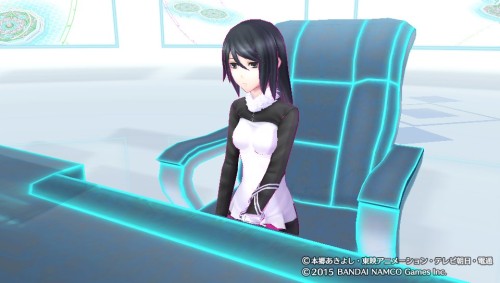 Kamishiro Yuuko is a mysterious girl who asks the help of the Digital Detective to look for her brother and to clean her father’s reputation. She has a hard time to express her feelings, so she usually looks emotionless, but once she lets her real feelings out, she can be unexpected harsh. Which is why the protagonist starts start calling her “Black Yuuko” for those moments.

Yuugo is the leader of Zaxon, a chaotic group of Hackers who wish to make of Eden a free realm for them to do whatever they want. He’s not interested in unnecessary conflicts, though, and seems to be very interested in the protagonist.

Kuremi Kyouko is the private detective who hires the protagonist to work under her as a Digital Detective. She just knows too much and nobody knows who or what her sources are. By using all the information she gathers, she is always one step ahead of everybody. She also has a passion for coffee and is always creating new brands, but they all taste awful to anyone but her.

Media.Vision has done a great job with the writing, pacing and planning for this game, as there are many characters in the story, but they never feel unnecessary, since they are always connected with something bigger. It never takes too long for something important to happen in the plot, and there are some drastic changes to the world as you play the game, which makes difficult to get bored with the story.

The central characters are always relevant to the main plot, each one being involved in their very own conflicts and developments. It almost feels like they are about to over-throne the mute protagonist from the lead role by getting all the attention to themselves, but the main character always manages to stand-out as the true main figure of the game. 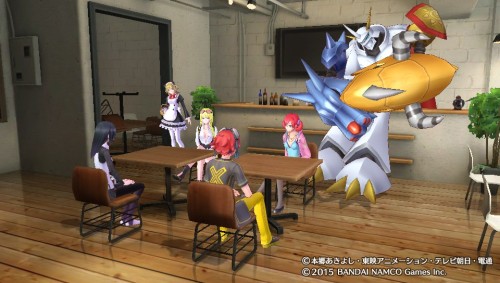 This is something that I appreciate, since lately, most silent protagonists are just “buddies” to a NPC who turns out to be the real main character of the game. Thankfully, this isn’t the case in Cyber Sleuth.

Your main character has a back-story, a family, people to care for and even a personality, which doesn’t make for a  good place-holder. Occasionally, the protagonist will even get dialogs (usually during scenes where there’s no one around). I believe it was an attempt to get the best of both worlds. Regardless, it never feels like one style is restraining or overshadowing the other, so it was quite enjoyable to play as this protagonist from the beginning to the end.

The writing is not exactly Shakespeare, but it’s really effective. It appeals to the shounen audience with many topics and elements that are relevant for this demography, like battles, friendship, rebellion, betrayal and new found powers, but not much of romance. All the characters have depth to them and they are pretty charismatic…Well, except for one of the main villains, who is too obnoxious even for Shounen stuff!

The battles are random and turn-based. Enemies and ally units have weaknesses based on races and elements, by taking advantage of those, your attacks can deal up to three times more damage. In other words: It feels a lot like Pokemon. You can even battle against your friends and there are ranks for Tamers.

You also have the Digi Lab, which is managed by Mikagura Mirei from Digimon World – Re:Digitize for PSP and 3DS. Once there, you can give birth to new Digimons, make Digivolutions, revisit Dungeons and much more. This was clearly taken from Digital Devil Saga, which means Mirei is essentially the “Igor” of this game (She is also a fortune-teller, for this matter). 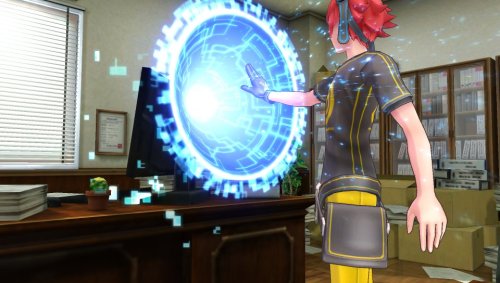 There are not too many places to visit and most areas are not too big, which is exactly a good thing, since it will not become tiresome to revisit those places many times during main events and side-quests. 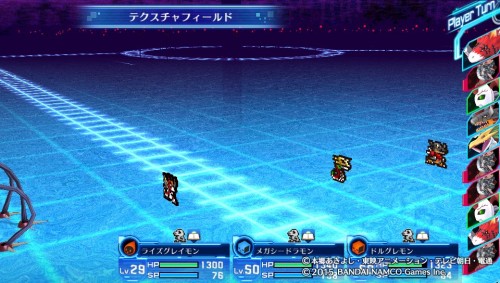 On a related note, the side-quests are surprisingly well-thought-out! Each quest has their own mini-plot and characters. The objective is always very different for each side-quest. It’s rare to find a simple fetch-quest and the prize to complete each of those tasks is always satisfying. You can even get promoted the more quests you complete! Which doesn’t change anything in the game, but it certainly feels good, for some reason…

If you plan to play this game right away, go to this Blog right here for a more in-depth guide of the main systems within the game.

After working on Re:Digitize, the super famous Yasuda Suzuhito returns as the character-designer. He’s known for his very stylish visuals that fits really well with the Japanese Pop-culture. His visuals are still as effective as always. His designs are not the most originals in the industry, but it’s never something plain or cliché. 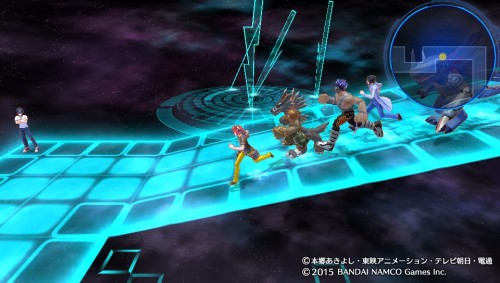 The developers did a great job with the 3D models as they were able to capture the very essence of Yasuda’s style. The characters are very expressive with many poses, gestures and facial expressions. The only let down is the lip-sync, as the mouth is just a texture changing randomly from a frame with the mouth shut to one with the mouth opened while there’s a dialog.

It’s also a waste, since they got the all assets required to build cinematographic scenes with different camera angles and effects, which would be much more effective. I think it’s time for some Japanese developers to go out of their safety zone by trying something different and more interesting for cut-scenes.

Each place in the “real world” was directly taken for real locations in Japan and they made an astonishing job recreating those locations in the game.

The Eden is also a pretty lively and interesting world where everything seems to be in constant movement. Things float around on the background while floating screens and menus can be spotted everywhere. 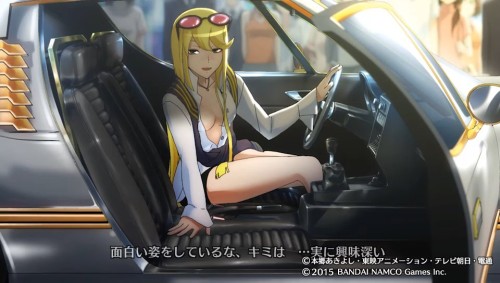 As anyone could expect for this kind of game, a team of high-level voice-actors was assembled to voice all the characters in the game. You can find big names like Han Megumi (Nokia), Kishio Daisuke (Arata) and even Sakamoto Maaya (Kyouko).

The voice-directing is quite decent as well, since even the mob-characters sound great! There’s just nothing to complain about the voice-acting. 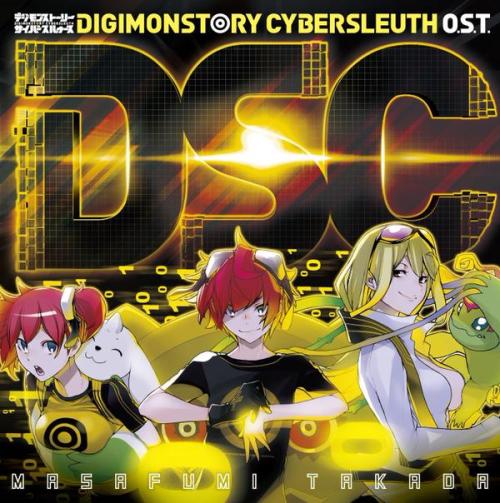 Takada Masafumi is the composer. His previous works include games such as Danganronpa, No More Heroes, Evil Within and even some arrangements for Smash Brothers. He used many different styles on this soundtrack. Techno, Rock, Pop, and of course, the obligatory chorus for epic moments. Some tracks fit really well, others not so much. Most tracks are memorable and catchy, but there are a few that sound a bit annoying. Thankfully, there are more hits than misses.

Cyber Sleuth is a very satisfying game. It was nostalgic, heartwarming and exciting! The story is not complex but it never feels stupid. The battles and objectives are not too difficult, but never too easy, either. It’s a very complete game with too many stuff to do even after finishing the main campaign. It has months’ worth of entertainment, but it’s not certain to please everyone. It plays very differently from Re:Digitize and many Pokemon players will complain about how simple the battle mechanics are. 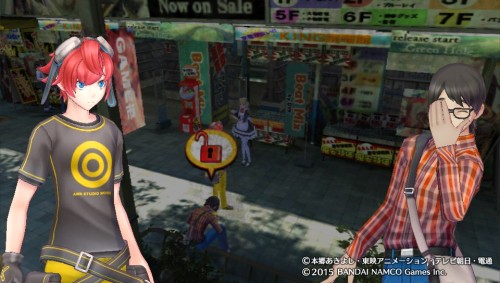 In my opinion, I think it was an impressive job considering how far they got with a complete new game style for this franchise. Let’s never forget how simple the first Pokemon games were and how many years it took to be polished until it became the way it is now.

I believe this Digimon game has the potential to become something as big and interesting as Pokemon is. Therefore, It deserves to get a sequel and a localization! This game did really well in Japan, and with a new Digimon anime coming out soon, the Digimon hype will keep getting higher and higher this year!